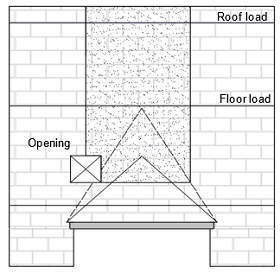 The scope of this calculation module is to analyse a lintel beam subjected to masonry loads. Additionally, roof, floor and point loads can be specified as optional. Maximum bending moment and total equivalent load on the beam is calculated with or without openings in the masonry wall. The masonry wall can be either solid or cavity type with or without insulation.

New to ECPlus? Sign Up
Already have an Account?Login